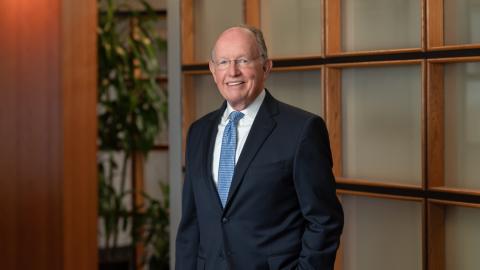 The Trustees Gold Medal, first awarded in 1966, is the highest accolade bestowed by Albany Law School and is given to an individual who has demonstrated a record of exemplary support and dedication to the advancement of Albany Law School. The award is presented by the Board of Trustees from nominations provided by the National Alumni Association Board of Directors.

Judge Malone is a 1972 graduate of Albany Law School. Prior to joining Whiteman Osterman & Hanna as senior counsel to the Firm, he served in a variety of notable public service positions. From 2005 through 2012 he was a member of the Appellate Division of New York State Supreme Court, serving on the First Department in Manhattan and the Third Department in Albany. He had been an elected trial level Supreme Court Justice since 1998. For the fifteen years prior to that he was an Assistant United States Attorney for the Northern District of New York, where he specialized in both civil litigation and criminal prosecution.

Whiteman Osterman & Hanna, the Capital Region’s largest law firm with over 75 attorneys, has developed a reputation for innovative solutions and professional leadership. For over 40 years, the Firm has served the public and private sectors with a broad range of practice areas and industry expertise including business, commercial, education, energy, utility regulation, environmental, land use, immigration, intellectual property, labor and employment, real estate development, federal and state taxation, cybersecurity and data privacy, estate planning and administration, government relations and litigation.

View Member News
Recent News
Dowling Law PLLC Welcomes Mishka A. Woodley, Esq.
Dowling Law PLLC is pleased to welcome Mishka A. Woodley, Esq. to the team.  Mishka brings over twenty years of interdisciplinary experience in law, healthcare, business, and education. She provides legal, regulatory, and compliance services for stakeholders within diverse industries, while also facilitating partnerships between related interest…
Epilepsy Foundation of Northeastern New York Celebrates 40 Years of Service
The Epilepsy Foundation of Northeastern New York (EFNENY) celebrates 40 years of providing programs and services at no cost to an estimated 45,000 individuals affected by epilepsy in Northeastern New York. In honor of this milestone, EFNENY has created a 40th Anniversary Campaign to raise $40,000. Throughout the year, we will thank our donors and…
STRIDE Wounded Warrior Program Honors Alumni Veterans in a New Way
Each year STRIDE selects a new group of Wounded Warriors who have returned from deployment with permanent injuries to spend a weekend of skiing and outdoor snow sports that are adapted for success for any diagnosis. The experience is meant to connect and engage new wounded veterans with a local support network of injured veterans who have…
Read All News
Upcoming Events
Meet the Mayors
Join our highly anticipated annual “Meet the Mayors” virtual panel discussion. The forum provides Chamber members a first-hand opportunity to learn…
9 a.m. - 10 a.m.
Member Benefits
Designed for Chamber members looking to maximize their investment by getting engaged and connected with the business community. Whether you’re a new or…
9:00 - 10:00 a.m. EST
Ask the Experts: Have You Conducted a Pay Equity Audit Yet?
Learn what you need to know from the legal perspective about pay equity. For most employees, there are few areas of greater interest than employee…
9 a.m. - 10 a.m.
View All Events