Upping Our Game: SEFCU to Donate $250 to FeedMore WNY for Every Point the Buffalo Bills Score Against Kansas City 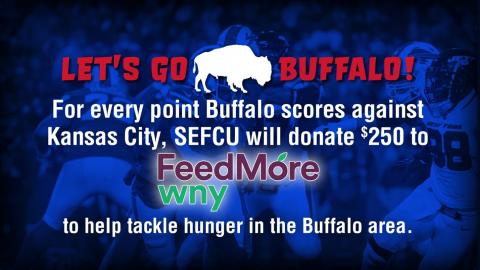 With their 47-17 win over the New England Patriots on Wild Card Weekend, the Buffalo Bills advanced in the NFL Playoffs and helped in the fight against hunger in Western New York.

Thanks to Buffalo’s dominance, and SEFCU’s commitment to donate $125 per point scored, $5,875 will go to FeedMore WNY.

For Sunday’s showdown with the Kansas City Chiefs, SEFCU is doubling down on its commitment  and will donate $250 per point to FeedMore WNY.

This is the second straight year SEFCU is donating to FeedMore WNY based on the number of points the Bills score during their playoff run. Last year, thanks to Buffalo’s run to the AFC Championship Game, SEFCU donated $20,000 to the nonprofit.