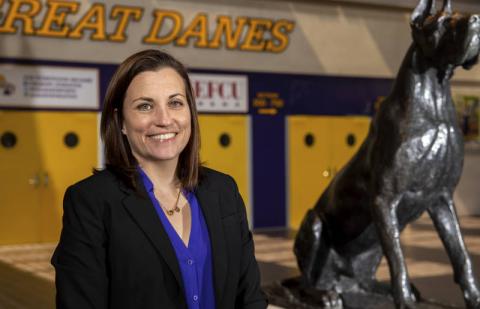 The University at Albany has announced the hiring of Colleen Mullen as the 12th women’s basketball coach in program history. Mullen joins the Great Danes from Army West Point, where she spent the past seven seasons, including the last six as Associate Head Coach.

“We are delighted that Coach Mullen will be joining the UAlbany family. I am confident that she and her staff will build on the great success our women’s basketball team has achieved in recent years both on the court and in the classroom,” UAlbany President Havidán Rodríguez said. “Coach Mullen will get to know very quickly that it’s always a great day to be a Great Dane!”

“Colleen stood out as the right fit to continue to escalate the championship culture of our women's program,” UAlbany Athletic Director Mark Benson said. “Throughout her career, she’s demonstrated a commitment to developing exemplary student-athletes. She is a leader whose values align perfectly with our mission to develop Great Leaders + Great Champions + Great Danes. We are thrilled to welcome Colleen and her family to UAlbany.”

“I’m so humbled and so grateful for this opportunity,” Mullen said. “I’m very appreciative of all the mentors I’ve had. Working under Dave Magarity at Army West Point, the premiere leadership institution in the world, has prepared me to take on this position. I’m grateful for an opportunity to develop student-athletes holistically into confident leaders, so when they leave UAlbany they can go on to a future of personal and professional excellence.”

Mullen takes over a program that has reached the postseason each of the past seven seasons, a stretch that included six straight America East championships and NCAA Tournament appearances.

“The championship culture, the success over a long period of time, just the ability to be able to work with young student-athletes that have that championship mentality is very exciting for me,” Mullen said.

At Army, Mullen helped guide a program that made four postseason appearances, with two trips to the NCAA Tournament, and posted a 138-51 overall record, including a 77-27 mark in the Patriot League.

She was hired at Army in 2011 as an assistant and promoted to Associate Head Coach after just one year. During Mullen’s tenure, Army won two Patriot League Tournament titles and two regular-season championships. The 2015-16 squad won 29 games, setting program and Patriot League records.

“I’ve been fortunate to have had a number of outstanding Assistant Coaches during my career and Colleen Mullen has proven to be one of the very best and brightest,” said Army’s head coach, Dave Magarity. “Her knowledge of the game combined with her exceptional communication skills have had an incredibly positive impact on our women’s basketball program at Army West Point during her tenure. She has excelled in every aspect of her responsibilities and without question will be a terrific head coach for UAlbany.”

Mullen said she plans to bring to UAlbany the same fast-paced style of play she helped employ at Army.

“We played a high-pressure defense with a lot of great athletes, and high-pressure defense turned into great offense,” Mullen said. “We looked to push the ball, be unselfish and share the ball. It’s a great style of play that kids love – definitely controlling the boards, rebounding and running.

“As a former point guard, I’m really excited to work with the great guards coming back here and have a system where they can really create and be unselfish.”

After getting her start in coaching at Northern Illinois as the director of basketball operations (2004-05), Mullen was an assistant coach and recruiting coordinator at Southern New Hampshire University for two seasons (2005-07).

“UAlbany is getting a great person who understands today’s student-athletes,” Southern New Hampshire Head Coach Karen Pinkos said. “Colleen takes great pride in her leadership, work ethic and ability to communicate well with others. Colleen will be a dynamic head coach and will continue the success that UAlbany women’s basketball has established over the past decade. Her players will love playing for her!”

Mullen also was an assistant coach Lehigh University (2007-08) before moving on to Army.

She played Division I basketball at Rhode Island, where was the starting point guard in 1998 and 1999, as well as New Hampshire, where she was a two-year co-captain and starter in 2001 and 2002 as well as a two-time member of the America East Academic Honor Roll.

“I’m really excited and really appreciate Mark Benson, President Rodríguez, Cara White, Jerry Koloskie, and everyone in the search process,” Mullen said. “I felt after my interview that the people are what make this place special. I can’t wait to get started.”

View Member News
Recent News
Upping Our Game: SEFCU to Donate $250 to FeedMore WNY for Every Point the Buffalo Bills Score Against Kansas City
With their 47-17 win over the New England Patriots on Wild Card Weekend, the Buffalo Bills advanced in the NFL Playoffs and helped in the fight against hunger in Western New York. Thanks to Buffalo’s dominance, and SEFCU’s commitment to donate $125 per point scored, $5,875 will go to FeedMore WNY. FeedMore WNY serves millions of meals to homebound…
CAP COM FEDERAL CREDIT UNION LAUNCHES ANNUAL FOUNDATION INFASTRUCTURE INITIATIVE
ALBANY – January 19, 2021 – CAP COM Federal Credit Union and its charitable giving arm, the CAP COM Cares Foundation, is pleased to announce the launch and second year of the CAP COM Cares Foundation Infrastructure Grant Initiative. The program is in response to help the Credit Unions existing & potential nonprofit partners, in supporting…
Capital CFO- Professional Development Courses
SARATOGA SPRINGS, N.Y., January 10, 2022  -- (https://capitalcfollc.com/ ): Capital CFO, LLC, a regional provider of bookkeeping, consulting, and CFO services to businesses and nonprofit companies, is pleased to announce the launch of their Professional Development division. With an eye toward providing increasingly comprehensive business…
Read All News
Upcoming Events
2022 State of the County Luncheon
Join the us at the 2022 State of the County Luncheon and learn what's ahead for the Rensselaer County business community in the new year.  Rensselaer…
Check-in and Lunch at 11:30 AM. County Executive's address at 12 PM.
February NetworkingPlus Luncheon
Kick off 2022 and get connected, develop leads and build relationships at our one-of-a-kind, fast-paced networking event. This popular networking event…
Check-in and Lunch at 11:30 AM. Networking program from 12 - 1 PM.
Meet the Legislators Luncheon
A panel discussion featuring State representatives addressing issues facing our communities.  The Chamber's "Meet the Legislators" event provides members…
Check-in & Luncheon at 11:30 AM. Panel Discussion with Legislators and Q&A from 12 - 1 PM.
View All Events