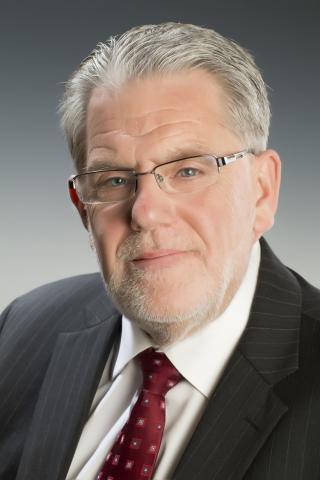 The Sage Colleges named a new president on March 1, 2017 after a nine-month national search. Christopher Ames, Ph.D., provost of Shepherd University in Shepherdstown, West Virginia, longtime literature professor, and published author, has been selected to lead Sage into its second century.

Sage faculty, staff, students, trustees and local alumni were invited to hear firsthand the announcement of Sage’s next president – and meet him in person. Although Ames does not assume the post until July 1, 2017, he traveled to campus for the announcement and meet and greet receptions on both campuses.

The announcements were made by Tip Simons, chair of The Sage Colleges Board of Trustees, and current president Dr. Susan C. Scrimshaw, who announced in June 2016 that she will be stepping down at the end of her contract in June 2017.

"I am delighted that someone with Dr. Chris Ames’ extensive experience and dedication to students, faculty and community will be the next president of Sage,” said Scrimshaw.

ABOUT THE NEW PRESIDENT

Since January 2013, Ames has directed academic affairs at Shepherd University, a public liberal arts university, where he also oversaw the NCAA Division II athletic program. He led the Martinsburg Center initiative, a satellite campus serving working adults pursuing graduate and undergraduate degrees and certificates. He has collaborated with the faculty on the creation of new programs, including a Doctor of Nursing Practice, a Master of Science in Data Analytics and Information Science, and new undergraduate degrees in Music Performance, Early Education, Engineering Science, and Health Promotion and Exercise Science.

“I’m fascinated by the institutional mix at Sage – a residential women’s college in Troy, a co-educational undergraduate campus in Albany, and thriving graduate programs,” Ames said. “Making sure those different elements complement one another and inform a Sage that is even greater than the sum of its parts – that is an opportunity that greatly appeals to me.”

Ames, who taught 20th century literature and film for 15 years at Agnes Scott College, a liberal arts college for women in Atlanta, says, “I believe in the profound distinctiveness of the women’s college and in the spirit of social change and inclusion that motivated the original formation of women’s colleges.”

“I am a firm believer in liberal education, but I do not believe that the liberal arts should be sequestered into one world while professional programs are housed in another,” Ames said. “If we believe in the power of broad liberal education, we believe in having liberally educated nurses, accountants, therapists, and managers, as well as professionally prepared artists, designers and social scientists. Sage has been dedicated to pragmatic liberal education from its founding, and I am convinced those values will inform the institutions that thrive in the century ahead.”

A Phi Beta Kappa graduate of the University of Texas at Austin, Ames earned a Ph.D. in English Literature from Stanford University in Stanford, California. He is a graduate of Harvard’s Institute of Educational Management and the Aspen Institute Executive Seminar on Leadership.

Ames has published two books: The Life of the Party: Festive Vision in Modern Fiction (University of Georgia Press, 1991), which was republished in 2010, and Movies about the Movies: Hollywood Reflected (University Press of Kentucky, 1997).

Ames and his wife will relocate to the Capital Region in July. “We are excited about Troy and Albany as new places to explore but also a part of the country that very much feels like home,” said Ames, who grew up in River Edge, Bergen County, New Jersey.

View Member News
Recent News
Capital Region Businesses, Donors Raise $25,000 for Kids & Veterans with Disabilities
(West Sand Lake, NY, 6/24/21) – Regional athletes with disabilities from STRIDE Adaptive Sports had a lot to cheer about this past Saturday when they crossed the 5K finish line at Jennings Landing in Albany. Thanks to a generous group of regional businesses led by presenting sponsor American National Insurance – as well as many individual donors…
Catholic Charities Celebrates Camp Scully's Century of Summers
Wynantskill, NY – On MONDAY, JUNE 21, Catholic Charities Tri-County Services' Camp Scully celebrated a major milestone: 100 years of service to children and families in the region. The celebration included a tour of the newly-renovated camp grounds, a reception and a brief speaking program.  Camp Scully’s anniversary year kicked off with a lofty…
Alaant Hiring Index: Employees Return to the Office, Employers Plan for Workforce Growth, Even as Hiring Becomes More Difficult
Albany, NY – As COVID-19 cases decline and vaccinations rise, Capital Region professionals are increasingly returning to offices, and employers are hiring and optimistic about further job growth as the economy recovers. However, those expectations are clouded by a significant recruiting challenge, with 4 of 5 employers saying they can’t find…
Read All News
Upcoming Events
Ribbon Cutting for The Arts Center of the Capital Region “From Troy to Troy” Murals
From Troy to Troy is a public art project conceived in response to the protest murals created June 2020. Artists who live or work in Troy were invited to…
11 a.m.
Ribbon Cutting for Curtis Lumber East Greenbush
The Chamber will help Curtis Lumber East Greenbush celebrate its grand opening with a ribbon cutting ceremony. About Curtis Lumber Curtis Lumber East…
11 a.m.
Ribbon Cutting for The Cakerino
The Rensselaer County Regional Chamber of Commerce will help The Cakerino celebrate its grand opening with a ribbon cutting ceremony. Inspired by her own…
1:30 p.m.
View All Events