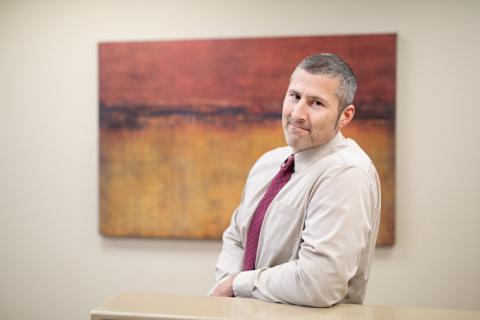 With the firm since 1998, Matt provides structural engineering design and management for bridge and contractor support services projects. He earned his Bachelor’s degree from West Virginia University and is a member of several professional associations, including the American Society of Civil Engineers (ASCE), American Institute of Steel Construction (AISC), and the Association for Bridge Construction and Design (ABCD).

Matt was honored as Young Engineer of the Year by the Capital District Chapter of the New York State Society of Professional Engineers in 2009 and Engineer of the Year by the ASCE Mohawk-Hudson Section in 2015. Matt has previously served as Chair of the Capital District’s Celebration of National Engineers Week and as the Program Committee Chair for the Eastern New York Chapter of ABCD. He is also an evaluator for the Practicing Institute of Engineering (PIE), for which he is responsible for the review and approval of courses for continuing education credits. Matt has been a mentor for local middle and high school students interested in pursuing careers in engineering, allowing them to shadow him during school breaks and visiting their schools to speak to classes about careers in engineering.

Matt served as Project Manager of the Hadley “Bow” Bridge over the Sacandaga River, a multiple award-winning historic bridge restoration project. Matt has written articles that have been published in STRUCTURE magazine including “Raising the Bar on Bridge Jacking” and “The Hadley Overpass Project: Taking the “Stress” out of Bridge Repairs.”

View Member News
Recent News
July Newsletter
Pattison, Sampson, Ginsberg & Griffin Hires Two Summer Law Clerks
Troy, N.Y. – Pattison, Sampson, Ginsberg & Griffin, PLLC has added two new summer law clerks, Lindsay Carr and Michael Pitcher, to the firm headquartered in Troy. A student at Albany Law School, Carr has joined Pattison, Sampson, Ginsberg & Griffin as an intern following her second year of law school. In this role she will conduct legal…
Unity House appoints David Bach as new CEO
Troy, N.Y. – David L. Bach of Burnt Hills, who has served as Associate Commissioner of the New York State Office of Children and Family Services, Division of Child Welfare and Community Services since 2019, has been appointed as the new CEO of Unity House. Last spring, longtime Unity House CEO Chris Burke announced that he would retire in mid-2022…
Read All News
Upcoming Events
NYS DOL Tools for Success
Our partners at NYS DOL have the tools to recruit and retain your workforce. Stephen Ryan, Shared Work Initiative Project Coordinator, and Laurie Thomson…
Webinar
Resume Review- Check Your Bias Here!
Did you know that recruiters and hiring managers take an average of only 7.4 seconds to review a candidate’s resumé? Using a mock resumé,  we will review…
Skills Building Webinar
2022 Annual Golf Classic
The Chamber’s Annual Golf Classic returns to The Country Club of Troy for a day of clubs, carts, and connections.   The scramble-style format provides…
Networking is Par for the Course
View All Events