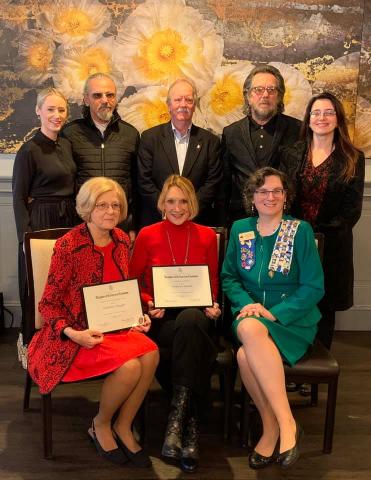 Congratulations to Kelly Grimaldi, Director of Education and Program Development for Albany Diocesan Cemeteries on recently receiving a Community Service Award from the National Society Daughters of the American Revolution (DAR), General Peter Gansevoort Chapter.  The award, approved by the State and National DAR societies, recognizes Kelly for her dedication and hard work in reminding us of our obligation to respect and honor the memory of enslaved persons, veterans, little known people as well as successful people of our past.

Kelly is a dedicated researcher, bringing to life the stories and history of our community.  She confesses to having had a fascination with historic cemeteries most of her life.  For over 20 years, before accepting a position with Albany Diocesan Cemeteries in 2010, she did volunteer work for many old cemeteries from Maine to New York.  While working full-time in her capacity as Albany Diocesan Cemeteries’ first official historian, Kelly completed graduate studies in history at the University at Albany with a concentration in material culture, burial practices and funerary art and symbolism. Kelly puts her Masters of Arts degree in history into practice by developing popular lectures featuring the cultural and artistic relevance of cemeteries.

In April 2018, Kelly began a year-long Veterans Memorial Restoration Project at St. Patrick’s Cemetery in Watervliet, NY. It was a three-phase project that began with a survey of each cemetery section to locate the graves of veterans from the Civil War to the Vietnam War.  Mapping with GPS coordinate was done as part of phase one.  Phase two involved the excavation of fallen stones and making repairs as necessary.  The gravestones were cleaned after repairs were made.  Phase three resulted in the creation of a detailed report of over 1,000 veteran gravesites including data on the decedent and an account of what restoration work was done to the gravestones.  Pictures of the restored stones were taken as part of the final project.  All of this work was made possible with the help of volunteers and with a grant awarded to Albany Diocesan Cemeteries by the National Society, Daughters of the American Revolution.

Kelly is always looking for ways to engage community partnerships and often partners with local scholar facilitators to host reading and discussion programs centered on various topics of interest offered through grants awarded by Humanities NY and through Hudson Valley Community College’s Creative Retirement Program.  She also developed an art program that has become very well known in the community.  Her painting classes are fully booked months in advance.  She hires professional art instructors to teach a variety of painting and drawing classes at Historic St. Agnes Cemetery in The Living Room Art Gallery located in the Visitor Center; a gallery she established in 2013 which serves as exhibit space for local artists.

In 2017, Kelly authored a highly regarded book, “These Sacred Grounds” celebrating 150 years of

St. Agnes Cemetery history.  She has also written and produced twenty short video skits called “Graveside Chats” (some are available on YouTube) that offer a glimpse into the history and stories of people interred in St. Agnes Cemetery.   Kelly’s mission is to recruit what she calls “cemetery enthusiasts” by offering people new ways to look at and respect burial grounds from a historical and cultural perspective.

Also recognized at the awards ceremony was Mark Quandt, Executive Director with the Regional Food Bank of Northeastern New York.

View Member News
Recent News
Arts Center of the Capital Region Releases Two Calls For Art
TROY (5/18/2022)—The Arts Center of the Capital Region is pleased to announce two Calls for Entries, Artificial Eye: The 41st Annual Photo Regional and Capture: A City Wide Photography Exhibition. Call for Entries:  Artificial Eye: 44th Annual Photo Regional. The Arts Center of the Capital Region is inviting photographers to submit work for…
Mark Wagner Selected for Chair of the New York Cannabis Growers and Processors Association's Capital Region Committee
May 12th, 2022 In April 2022, The Wagoner Firm’s Mark J. Wagner, Jr. was chosen by the New York Cannabis Growers and Processors Association to serve as Chair of its Capital Region Committee. Mark was selected from a competitive group of applicants based on his background and experience with medical marijuana licensing and applications, the…
Berkshire Bank Launches the Center for Women, Wellness, and Wealth (CWWW)
BOSTON – Berkshire Bank, a leading socially responsible community bank with office locations in New England and New York, announces the launch of the Center for Women, Wellness, and Wealth (CWWW). The Center will offer client-focused events on wellness and financial planning, and will partner with community organizations, specialized experts and…
Read All News
Upcoming Events
Congressional Forum
The Congressional Forum allows members to hear directly from Congressman Paul Tonko. He will discuss matters that impact the region’s economy and…
Lunch and Panel Discussion
Active Shooter Preparedness Webinar
The Chamber's partner The Cybersecurity and Infrastructure Security Agency invites you to a security webinar. The webinar is intended to enhance awareness…
Webinar from 10 a.m. to 12 p.m.
June NetworkingPlus Lunch
Get connected, develop leads and build relationships at our one-of-a-kind, fast-paced networking event. This popular networking event features a…
Market, Develop, & Connect
View All Events