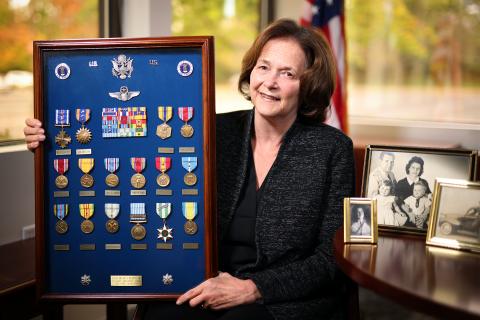 Excelsior College has updated and relaunched the
Lt. Col. Bryant A. Murray Veterans Center, an online resource center for veterans. The veterans center provides resources not only for education but also for career, health and wellness, and transition to civilian life.

Veterans and military students represent 51 percent of Excelsior’s student population, and this center is designed with them in mind. However, the Lt. Col. Bryant A. Murray Veterans Center is also available for the entire Excelsior community and the public.

“In recognition of the unique needs of veterans, Excelsior is pleased to relaunch the Lt. Col. Bryant A. Murray Veterans Center,” said James Lettko, chief operating officer of Excelsior College and retired U.S. Army brigadier general. “We are committed to serving the veterans in our Excelsior community and supporting all U.S. veterans.”

Named a “Best for Vets” school 11 times, Excelsior College has made it a priority to ensure that all veterans, as well as servicemembers, have access to the resources and education they need.

“In honor of my father’s 30-year career in the U.S. Air Force and with deep gratitude to all veterans and military servicemembers who defend our great nation and democratic values, my family and I are so pleased to support the relaunch of the Lt. Col. Bryant A. Murray Veterans Center to pay it forward to our veterans and Excelsior College, which has demonstrated such an abiding commitment to them,” said Bryanne Hamill, alumna and former trustee of Excelsior College. “Having observed first-hand the sacrifices of our veterans—putting country above all else—we owe it to them to provide them the tools, including education, to ensure their success thereafter.”

The online resource center can be accessed at https://www.excelsior.edu/veterans/

View Member News
Recent News
Martin A. Schmidt, Ph.D., Named the 19th President of Rensselaer Polytechnic Institute
Martin A. Schmidt, ’81 Ph.D., has been named the 19th President of Rensselaer Polytechnic Institute (RPI) by the Rensselaer Board of Trustees. Dr. Schmidt, currently Provost at the Massachusetts Institute of Technology (MIT), will assume office at the nation’s oldest and one of the world’s most renowned technological research universities on July…
CATHOLIC CENTRAL HIGH SCHOOL AND ST. AMBROSE SCHOOL TO PARTNER TO FORM PRE-K-12 REGIONAL CATHOLIC SCHOOL ON LATHAM CAMPUS
Catholic Central School Set to Open in Fall 2022   In a move designed to strengthen the future of Catholic education in the Capital Region, the Albany Diocesan School Board (ADSB), under the leadership of Bishop Edward B. Scharfenberger, today announced it will create a new school in Latham that will allow for a continuum of Catholic education…
Stewart's Shops Gives Employees Bonuses
Read the full articles from The Times Union and The Daily Gazette SARATOGA SPRINGS — About 4,900 part-time and full-time Stewart's Shops employees got a hefty "thank you" this week — bonuses that in some cases are equal to a week's worth of pay. The employees, or "partners," received the week-sized checks, while those who started after September…
Read All News
Upcoming Events
Holiday NetworkingPlus Luncheon
Jump-start your holiday season, get connected, develop leads and build relationships at this fast-paced networking event. This event is one of our most…
Details: Check-in and Lunch 11:30 a.m. - 12:00 p.m.; Networking 12:00 p.m. - 1:30 p.m.
Cannabis: An Economic Buzz
Thinking about taking a leap into the legal cannabis in New York State? Our panel of experts will discuss the current landscape of this emerging industry…
Lively panel discussion with Q&A
2022 State of the County Luncheon
Join the Chamber at the 2022 State of the County Luncheon and learn what's ahead for Rensselaer County and the business community in the new year. …
Check-in and Lunch at 11:30 a.m. followed by the County Executive's address at 12 p.m.
View All Events