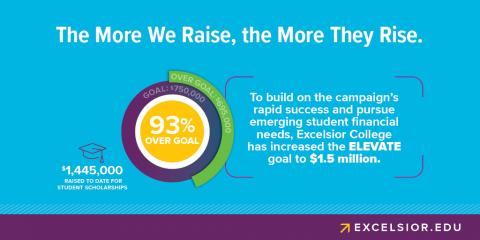 Excelsior College is proud to announce that the original 50th anniversary campaign goal of $750,000 was surpassed. To build on the Elevate campaign’s rapid success and pursue emerging student financial needs, Excelsior has increased the campaign goal to $1.5 million. Due to donor generosity, $55,000 is needed to reach the new goal.

Excelsior’s commitment to student scholarships remains steadfast. All donations to the campaign will continue to go directly to student scholarships. Donations received now through June 30, 2022, will be earmarked for students who are within 12 credits of completing their degree to help students close to degree completion fulfill their academic goal.

“We are humbled by the outpouring of support shown by the Excelsior community, whose giving has far surpassed our expectations,” said Jamie Hicks-Furgang, executive director of development and alumni engagement. “The diversification of giving among our community, including generous planned gifts, has been exciting. These donations will be transformational for the College and will allow us to begin to lay a foundation for future initiatives.”

In addition to donations from alumni, staff, faculty, and members of the board of trustees, Excelsior is thankful for gifts from the Carl E. Touhey Foundation, the Massry Charitable Foundation, the Wright Family Foundation, Business for Good Foundation, SEFCU, KeyBank, and Empire Blue Cross that make an immediate and lasting difference.

View Member News
Recent News
Arts Center of the Capital Region Releases Two Calls For Art
TROY (5/18/2022)—The Arts Center of the Capital Region is pleased to announce two Calls for Entries, Artificial Eye: The 41st Annual Photo Regional and Capture: A City Wide Photography Exhibition. Call for Entries:  Artificial Eye: 44th Annual Photo Regional. The Arts Center of the Capital Region is inviting photographers to submit work for…
Mark Wagner Selected for Chair of the New York Cannabis Growers and Processors Association's Capital Region Committee
May 12th, 2022 In April 2022, The Wagoner Firm’s Mark J. Wagner, Jr. was chosen by the New York Cannabis Growers and Processors Association to serve as Chair of its Capital Region Committee. Mark was selected from a competitive group of applicants based on his background and experience with medical marijuana licensing and applications, the…
Berkshire Bank Launches the Center for Women, Wellness, and Wealth (CWWW)
BOSTON – Berkshire Bank, a leading socially responsible community bank with office locations in New England and New York, announces the launch of the Center for Women, Wellness, and Wealth (CWWW). The Center will offer client-focused events on wellness and financial planning, and will partner with community organizations, specialized experts and…
Read All News
Upcoming Events
Ribbon Cutting: Paul Puccio School at Maple Hill
Join the Chamber and Questar III Boce's for the ribbon cutting celebration of the Paul Puccio School at Maple Hill. The school has been renamed in honor…
Grand Opening Ribbon Cutting Celebration
Congressional Forum
The Congressional Forum allows members to hear directly from Congressman Paul Tonko. He will discuss matters that impact the region’s economy and…
Lunch and Panel Discussion
Active Shooter Preparedness Webinar
The Chamber's partner The Cybersecurity and Infrastructure Security Agency invites you to a security webinar. The webinar is intended to enhance awareness…
Webinar from 10 a.m. to 12 p.m.
View All Events