Dr. Roger Ramsammy of HVCC Elected to World Federation of Colleges and Polytechnics Board of Directors 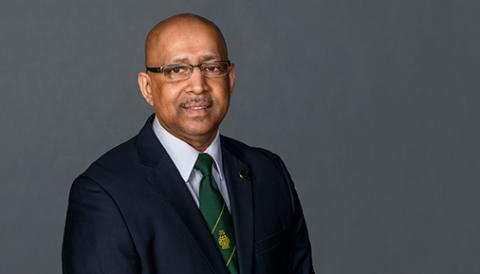 HVCC President is Only United States Representative on WFCP Board

Troy, NY – Hudson Valley Community College President Roger Ramsammy, Ph.D. was recently elected to the Board of Directors of the World Federation of Colleges and Polytechnics (WFCP). Formally established in 2002, the WFCP offers members “a forum to exchange best practices and promote professional and technical education and training across the globe,” with a vision of becoming “the principal international network for colleges, institutes and polytechnics.”

“It is a great honor to have been selected to serve on the board of directors of the World Federation of Colleges and Polytechnics,” said President Ramsammy. “WFCP plays a vital role in facilitating cross-border collaborations and providing opportunities for educators from across the globe to learn from one another. I am honored to become a part of that conversation on behalf of Hudson Valley Community College, and I look forward to both increasing opportunities for partnership with other WFCP member nations, and helping to inspire other US colleges and universities to join the organization.”

President Ramsammy’s goals as a WFCP board member include working to increase WFCP membership and support member engagement and retention in the organization; collaborating with American community colleges and baccalaureate degree-granting institutions to increase participation in WFCP sub-committees, workshops, affinity groups and professional development activities and awards programs; and serving as a liaison to the board, or as host, for future WFCP conferences or events to be held in New York or elsewhere in the United States.

This emphasis on international outreach and partnership building has been a hallmark of President Ramsammy’s leadership since becoming Hudson Valley Community College’s seventh president in 2018. International outreach is a key component of achieving the college’s goal of helping to break the cycle of poverty by providing educational opportunities to those most in need, thereby strengthening families and the communities in which they live—both in the Capital Region of New York State, where the college is located, and around the world.

Hudson Valley has an established history as an institution welcoming international students; each year, the college serves students from an average of more than 35 foreign countries who travel to the Troy, NY campus to pursue higher education. Under President Ramsammy’s leadership, Hudson Valley has undertaken numerous new global initiatives designed to help create educational opportunities for students from around the world.

Forging educational partnerships in Costa Rica has been one of President Ramsammy’s first priorities, and in November of 2021, the college signed a Memoradum of Understanding establishing a partnership with the Ministry of Public Education of Costa Rica (MEP) to help reduce the existing gaps between the urban and rural educational offerings in Costa Rica. This is the first partnership between a U.S. higher education institution and MEP. In addition, the college developed an Electric Vehicle Train-the-Trainer Program for automotive mechanics instructors from Corporacion Educativa Automotriz in Costa Rica, which held its inaugural session on Hudson Valley’s campus in May of 2022. Costa Rica’s Universidad Isaac Newton has also provided Hudson Valley with office space on their campus, which supports the college’s outreach efforts in Costa Rica and throughout Central America.

The college has also developed partnerships with a number of high schools and universities across the globe, which have led to innovative program models. The Global Classroom High School Program (GCHP), launched in Costa Rica during the summer of 2020, allows high school students outside the United States to take credited college-level courses delivered online, asynchronously, at a significantly reduced cost. Credits can be applied to Hudson Valley programs or transferred to most four-year colleges and universities in the United States, as well as many institutions outside the United States. The program has been extremely successful, enrolling students from 22 countries during the summer of 2021, with more expected in 2022.

Over the past few years, President Ramsammy and Hudson Valley have also met with representatives from several other nations to establish plans for future partnerships, including the Philippines, Trinidad and Barbados, Germany, Ireland, China, Nicaragua, Israel, the CARICOM nations of the Caribbean, and the Ivory Coast, to name a few.

Locally, the college established an Immigrant and Refugee Community Forum to establish a point of connect for those in need of education and workforce training available at the college. Also, Hudson Valley invited the International Center of the Capital Region (ICCR) to move its headquarters on campus in a space shared with the college’s Office of Global Initiatives. ICCR is a non-profit organization founded in 1956 to promote cultural understanding by welcoming international leaders and newcomers to the Capital Region. Its presence on campus facilitates a synergistic relationship between the college and ICCR and strengthens ICCR’s efforts to offer citizen diplomacy experiences, while allowing the college to increase its global presence.

In addition to his membership on the WFCP board, President Ramsammy serves on numerous other boards, commissions and committees, including the Board of Directors of the New York State Economic Development Council; Regional Economic Development Council; Center for Economic Growth and its Advanced Manufacturing Workgroup; the United Way of the Greater Capital Region and its Community Impact and Investment Committee; the American Association of Community Colleges Commission on Structured Pathways; the City of Albany’s COVID Recovery Task Force; and the Capital Region Chamber's Strategic Plan Directors' Workgroup, to name a few.

A native of Trinidad, President Ramsammy is a first-generation college student who recognizes the extraordinary potential of education to change both individual lives and communities. He joined Hudson Valley in 2018 with more than 30 years of experience in higher education, including senior positions at three of the largest and most diverse multi-campus colleges in the United States, and he has received multiple awards for his commitment to global affairs, diversity, equity and inclusion, as well as his innovative teaching and administrative accomplishments.

Those who are interested in learning more about becoming members of the World Federation of Colleges and Polytechnics may contact President Ramsammy at [email protected].