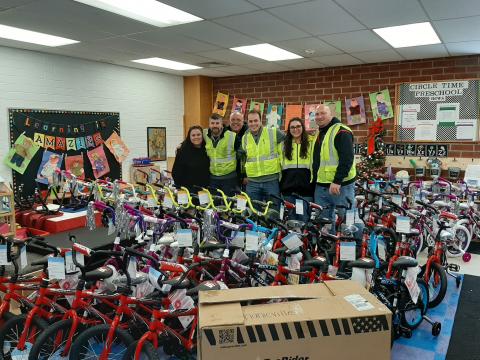 Three hundred children received brand new bicycles for Christmas this year, thanks to a record-breaking annual bike-donation initiative sponsored by Clifton Park-based garbage and recycling company County Waste. County Waste is owned by Waste Connections, a national firm that launched the now-annual bike-building event five years ago as part of its “Christmas Promise” program, which distributes the bikes and helmets to charities.

County Waste has donated a total of 700 bikes to various groups over the years, including the Troy Boys and Girls Club, In Our Own Voices and local churches. Last year, the company assembled 211 bikes. This past holiday season, the new bikes were delivered to six local organizations: Parson’s Early Learning, Mechanicville Area Community Center, Things of My Very Own in Schenectady, Troy Boys and Girls Club, Circles of Mercy in Rensselaer, and Christ Episcopal Church in Ballston Spa.

Employees — there are 200 at the Clifton Park location — donate money to buy the bikes, and the company matches the amount raised. County Waste also accepts outside donations for the project. After the bicycles are purchased, employees take some time during the day, either coming in before a shift or donating time later on, to unpack the bike parts, assemble them and test them.

The number of bikes donated through the program has grown each year, starting at 50 bikes in 2012. Most of the bikes are meant to be “first-time” bikes for young children, and they come in a range of colors — those assembled this year were pink and green and yellow.

However, County Waste has also received requests to buy bikes that would be suitable for older children. Those bikes often go to children in foster care who might not have been able to take their old bikes with them when they moved. Last year, there were two larger mountain bikes assembled, as well.

"At County Waste, an important part of our mission is to engage with and contribute to the communities we serve and are part of,” said Mark Ceresa, Division Vice President of County Waste. “Our team is pleased to provide holiday cheer to 300 children this season and we look forward to continuing this tradition in the future.”

“In the season of giving, we are honored to take a moment to make an impact on a child’s holiday,” said Rohannah Abzal, office manager at County Waste. “Our employees are members of the communities we serve, and we’re proud to help our neighbors and work with so many community partners to help us make wishes come true."

*story and quotes from a previously published article by The Daily Gazette.

View Member News
Recent News
Capital Region Businesses, Donors Raise $25,000 for Kids & Veterans with Disabilities
(West Sand Lake, NY, 6/24/21) – Regional athletes with disabilities from STRIDE Adaptive Sports had a lot to cheer about this past Saturday when they crossed the 5K finish line at Jennings Landing in Albany. Thanks to a generous group of regional businesses led by presenting sponsor American National Insurance – as well as many individual donors…
Catholic Charities Celebrates Camp Scully's Century of Summers
Wynantskill, NY – On MONDAY, JUNE 21, Catholic Charities Tri-County Services' Camp Scully celebrated a major milestone: 100 years of service to children and families in the region. The celebration included a tour of the newly-renovated camp grounds, a reception and a brief speaking program.  Camp Scully’s anniversary year kicked off with a lofty…
Alaant Hiring Index: Employees Return to the Office, Employers Plan for Workforce Growth, Even as Hiring Becomes More Difficult
Albany, NY – As COVID-19 cases decline and vaccinations rise, Capital Region professionals are increasingly returning to offices, and employers are hiring and optimistic about further job growth as the economy recovers. However, those expectations are clouded by a significant recruiting challenge, with 4 of 5 employers saying they can’t find…
Read All News
Upcoming Events
Ribbon Cutting for The Arts Center of the Capital Region “From Troy to Troy” Murals
From Troy to Troy is a public art project conceived in response to the protest murals created June 2020. Artists who live or work in Troy were invited to…
11 a.m.
Ribbon Cutting for Curtis Lumber East Greenbush
The Chamber will help Curtis Lumber East Greenbush celebrate its grand opening with a ribbon cutting ceremony. About Curtis Lumber Curtis Lumber East…
11 a.m.
Ribbon Cutting for The Cakerino
The Rensselaer County Regional Chamber of Commerce will help The Cakerino celebrate its grand opening with a ribbon cutting ceremony. Inspired by her own…
1:30 p.m.
View All Events