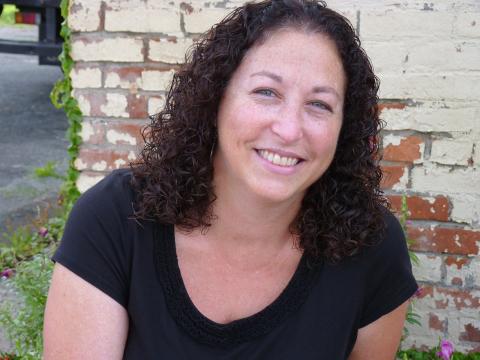 Amy Klein of local nonprofit Capital Roots celebrates 20 years of providing innovative solutions to our region’s food challenges. In recognition of the growth and success of the organization under Klein’s leadership, the Board of Directors voted in January 2017 to change her title from Executive Director to Chief Executive Officer.

“Over its four decades of service to the greater Capital Region, Capital Roots has grown so much in size, scope and complexity that the Executive Director’s job title no longer really describes what she does,” said Jean Gerbini, President of Capital Roots’ Board for the 2017 term.“‘CEO’ is a better fit, and Amy Klein, who has overseen the organization’s phenomenal successes for the past 20 years, is the right person to wear that title.”

Klein joined the nonprofit organization, (then Capital District Community Gardens) in 1996 as Executive Director. She was one of just two employees at the time, sharing a small office in the basement of an old brownstone on 8th Street in Troy. Under her leadership, the organization grew by leaps and bounds. The year she arrived, Capital Roots, or CDCG as many knew it, served the Troy community with community gardens and street tree plantings with a $66,000 budget. However, as her years with Capital Roots grew, so too did the organization’s offerings. Today Capital Roots serves hundreds of thousands of people in four counties through 12 distinct programs, providing neighbors with access to fresh, affordable and often local food.

“Amy’s tenure as the leader of Capital Roots has been transformative for the organization,” said Sharon Bedford, Capital Roots’ Board member since 1998, “and for our community and for me personally as a board member.”

Klein successfully manages a $2 million budget and a constantly growing organization today while at the same time building, maintaining and growing strong community partnerships. Innovation and calculated risks are the keys to her success. Klein developed the original model for mobile markets when she created the organization’s Veggie Mobile in 2007. This model of bringing fresh affordable food directly into communities lacking food security is now used nationwide across countless American communities.

Klein opened the doors to the Urban Grow Center in December 2014, Capital Roots’ innovative headquarters and regional food hub, a project 10 years in the making. The Urban Grow Center now channels the power of local agriculture for the social, economic, and physical benefits of the entire Capital Region and its 11-county food shed.

“I could never have imagined 20 years ago when I became a part of Capital Roots that this journey would be so personally rewarding and professionally transformative,” said Klein. “I feel blessed to work alongside a Board who provides leadership and gives the freedom to innovate, staff and volunteers who give so much of themselves to realize our mission, and supporters who have been willing to support each turn in the road that we have taken to achieve our goals. It has been a dream job that I hope to keep pursuing for many years to come.”

In addition to her leadership at Capital Roots, Klein is the founder and co-chair of the Capital Region Healthy Communities Coalition, a board member of Troy 20/20, member of the Capital Region Diabetes Task Force, and part of the Albany & Schenectady Strategic Alliance for Health, the Rensselaer County Wellness Committee and Troy’s Empire State Poverty Reduction Initiative.

View Member News
Recent News
July Newsletter
Pattison, Sampson, Ginsberg & Griffin Hires Two Summer Law Clerks
Troy, N.Y. – Pattison, Sampson, Ginsberg & Griffin, PLLC has added two new summer law clerks, Lindsay Carr and Michael Pitcher, to the firm headquartered in Troy. A student at Albany Law School, Carr has joined Pattison, Sampson, Ginsberg & Griffin as an intern following her second year of law school. In this role she will conduct legal…
Unity House appoints David Bach as new CEO
Troy, N.Y. – David L. Bach of Burnt Hills, who has served as Associate Commissioner of the New York State Office of Children and Family Services, Division of Child Welfare and Community Services since 2019, has been appointed as the new CEO of Unity House. Last spring, longtime Unity House CEO Chris Burke announced that he would retire in mid-2022…
Read All News
Upcoming Events
NYS DOL Tools for Success
Our partners at NYS DOL have the tools to recruit and retain your workforce. Stephen Ryan, Shared Work Initiative Project Coordinator, and Laurie Thomson…
Webinar
Resume Review- Check Your Bias Here!
Did you know that recruiters and hiring managers take an average of only 7.4 seconds to review a candidate’s resumé? Using a mock resumé,  we will review…
Skills Building Webinar
2022 Annual Golf Classic
The Chamber’s Annual Golf Classic returns to The Country Club of Troy for a day of clubs, carts, and connections.   The scramble-style format provides…
Networking is Par for the Course
View All Events