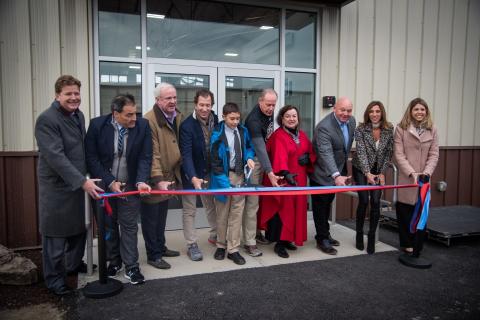 The Albany Academies unveiled their new $4 million athletic practice facility – The James E. Poole Athletic Facility – yesterday at a ribbon-cutting ceremony attended by students, faculty, alumni, alumnae and donors, many of whom joined a former student’s challenge to honor the legendary track coach, teacher, and mentor by giving the center his name.

The 32,000 square-foot multi-sport practice facility includes a four-lane track; areas dedicated to high jump, long jump, pole vault and shot put; and two basketball courts inside the track oval. The space can easily be reconfigured for volleyball, tennis, gymnastics, and a variety of field sports. The size and design of the indoor track and other practice areas are unique among high schools in the Capital Region.

“The Albany Academies have grown and regionalized over the last decade and we now field more than 50 athletic teams comprised of students from the greater Capital Region, including Saratoga and Schoharie counties,” said Head of SchoolChristopher J. Lauricella. “This facility was conceived and built to meet the programmatic demands that accompanied this growth. It allows for three simultaneous practices and a more reasonable school day for our student-athletes, who no longer have to practice into the evening.”

The project was supported by a fundraising campaign led by a capstone gift made by Tom Tuttle, a 1984 graduate of The Albany Academy. Tuttle made his donation with the intent of honoring James E.Poole, a legendary Academy track coach and teacher who graduated from the school in 1968 and continues his involvement today. Tuttle issued a challenge to all of Poole’s former students, athletes, and advisees and their families to make a gift to memorialize Poole well into the future.

As an Academy student, Poole was a member of two undefeated Hall of Fame swim teams, captained the first cross country team in 1967, and set a school record in the two-mile run in the spring of his senior year. At commencement, he was awarded the Goold Sportsmanship Cup for good sportsmanship and exemplary fair play at the Academy. He returned to the Academy in 1976, teaching middle school English and coaching varsity cross country and track and freshman swimming. His 2000 track and field team won a Class B state championship.After teaching in the middle school for 23 years, he moved to the upper school where he worked with sophomores, juniors, and seniors until his retirement in 2018.  The teams he coached won multiple Colonial Council and Section II championships.  He was involved in developing the specifications for the athletic facility during its construction.

“I am so honored that this outstanding building bears my name,” said Poole. “To be recognized in this manner by my former students and Academy athletes who accepted Tom’s challenge and donated in my name is the icing on the cake of a long and happy career here.”

Tuttle was a three-season, four-year varsity athlete in cross country, swimming and track and field during his time at The Albany Academy. At his graduation in 1984, he also received the Goold Sportsmanship Cup. Tuttle established a scholarship fund in 2008 to annually support Albany Academy students who have the promise to excel academically and athletically.

In addition to Tuttle and his family, other major donors to the project include The Flaherty Family, The Standish Family, The Hayes Family, and The Hens Family.  Nearly 200 other donors contributed as well, including alumni, alumnae, past and current parents at The Albany Academies.

Albany Academy for Girls Athletic Director Jennifer Murphy-Fries said,“Our goal is to provide the best academic and athletic experience possible for our students. The previous facilities presented scheduling challenges. Our students have school, practice late into the evening, and some have a lengthy commute home. This new facility allows multiple teams to practice at the same time, thereby ending athletic events earlier. This is safer and healthier for our students. It also provides us with an indoor space to continue some activities year round.”

“As discussions about a practice facility evolved, it became clear that we had a great opportunity to create a venue for indoor track,” said Albany Academy Athletic Director Paul Gallucci. “It is unique among high schools in the Capital Region and has the potential to drive increased enrollment by student-athletes who want to compete in track and field at an elite level.”